What Paul Taylor Has Taught Me

I was 22, fresh out of school. Wet behind the ears, I was using a light boom backstage as a warm-up barre before my debut performance with the Paul Taylor Dance Company. I noticed Paul Taylor walking toward me, wagging his index finger like a disciplining father, and I shrank with fear.

"Don't touch the booms. Someone has worked very hard to focus those lights," he admonished. And just before he turned to go, he paused and added, "And listen to your seniors." But he wasn't done. As he strode away, he turned back and said, "Oh, and always say thank you to the crew."

What struck me about Paul's notes—and what has stayed with me ever since—is what was at the heart of those three directives: respect, gratitude and the importance of family. They are values that are embedded in his dances and in his company.

Today, even in the most labyrinthine theaters, I will never touch a stage boom. Paul's simply stated lesson taught me about respect, about being a guest in someone's "house." He made me aware of the hours spent by the team who hang and focus the lights to illuminate our dancing. And that, in turn, gave me respect for the wardrobe team who clean and steam our costumes before every show, and for the crew who prepare the stage before we arrive and work late into the night long after we are gone. 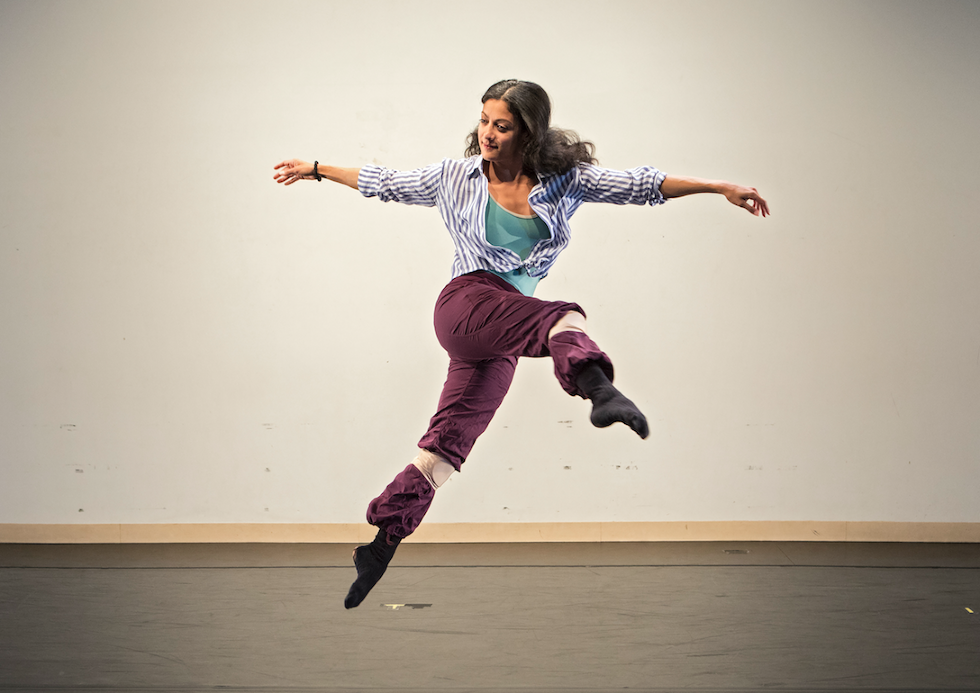 "Today, even in the most labyrinthine theaters, I will never touch a stage boom." Photo by Rachel Papo

Once, after a show at the majestic Fox Theatre in St. Louis, I approached a crew member whose eyelids were heavy with exhaustion. I extended my hand, shook his and said, "Thank you." His eyes widened with a look of shock and he said, "Only two artists have ever thanked me before—Robin Williams and Reba McEntire." Mouth agape, I said, "Clearly, I don't mind being in their company!"

Since then, I make sure to thank the crew of every theater we visit. It's a heartfelt, genuine thank-you for all the work that goes into making Paul's dances look and feel their best.

But, of course, I also owe gratitude to the person who taught me to be grateful. A year ago, at a rehearsal of Esplanade, I sensed an abandon and risk in my dancing I had never experienced before. I walked over to Paul and said, "Boss, thank you for making such an amazing dance. I love dancing your dances," and kissed him on the cheek. He replied, "Thank you for dancing them so well."

My eyes welled up, and I felt the power of gratitude, both the giving and the receiving.

In the nearly 15 years since I joined the company, I have learned that being a part of the Taylor family is about listening not only to Paul's words but also listening to his dances. Each one is built on an idea that informs the movement.

This year, I inherited Kate Johnson's role in Musical Offering, which was inspired by wooden sculptures from New Guinea. She begins alone onstage, as stoic as stone, but breaks free from her lifeless form. As the rest of the cast carve their way onstage, she infuses life into the group. The dance has a heartbreaking purity where I feel resistance, pain, anguish and eventually acceptance. The power of human connection is real with my partner, Michael Trusnovec, and my friends, where I feel the transformation into peace. As with many of Paul's dances, he is speaking of the inevitability of death.

Paul doesn't always say what he wants, but sometimes he shows you. In my very first studio rehearsal, he stopped the music less than two minutes into Offenbach Overtures, a dance that jests at formal etiquette. I was mortified: I knew that I had done something wrong, but what? Paul rose from his chair and walked toward me. With his cigarette-ash dusted fingers, he sculpted my arm into an exacting and explicit curve. In that moment, I learned that Paul is very particular about arms, hands and gestures—and the pause before and after a shape.

As I inherit roles that are new to me, I follow Paul's wisdom about listening to my seniors. I seek out the powerful men and women who have danced those parts before me. Through our conversations and rehearsals, I listen for what Paul's intentions were when he made the dance and how the dance has evolved over the decades since.

As we reconstruct Musical Offering, Kate Johnson has been generous in coaching me in this dance that depicts life and death as an eternal loop. Paul could also have been thinking here of the eternal loop of a dance company, where senior dancers are replaced by new dancers, and the dances become the sum of all who have danced them.

I make these roles my own, but I stand upon the shoulders of those dancers who have given life to Paul's artistry before me. The more experience I gain, the more depth I find in the smallest of details in dancing for Paul. I hope that future generations of Taylor dancers can take something from my contributions—and, in turn, make each role their own.

Today as I create with Paul, I am still discovering the things I don't yet know. The creative conversation feels both familiar and totally foreign because I don't know what I don't know. Sometimes it's as simple as understanding what he wants and offering him a movement that expresses that idea, or offering him a movement that he rejects—it's through this trial and error that we carve away until we find an idea to build upon. The creative process is a dance unto itself; it's a dance in discovery.

On and off the stage, I have learned to listen to Paul with my whole being, as if I have eyes and ears all over my body. I listen with the attentiveness of that beginner, compounded now with my experience dancing his deeply moving works. And I have come to understand that those lessons about respect, gratitude and family that Paul was teaching me at our first backstage encounter are embedded in all his choreography.

repost dance speakingindance movement instagram.com
If you like us online, you'll love us in print!
Teaching Tips
Rachel Caldwell

6 Ways to Bring Racial Equity Into the Dance Studio

By now, most dance educators hopefully understand that they have a responsibility to address racism in the studio. But knowing that you need to be actively cultivating racial equity isn't the same thing as knowing how to do so.

Of course, there's no easy answer, and no perfect approach. As social justice advocate David King emphasized at a recent interactive webinar, "Cultivating Racial Equity in the Classroom," this work is never-ending. The event, hosted by Dancewave (which just launched a new racial-equity curriculum) was a good starting point, though, and offered some helpful takeaways for dance educators committed to racial justice.

Op-Ed: Why Tap Classes Should Be Required in College Curriculums

Recently, I posted a thread of tweets elucidating the lack of respect for tap dance in college dance programs, and arguing that it should be a requirement for dance majors.

According to onstageblog.com, out of the 30 top-ranked college dance programs in the U.S., tap dance is offered at 19 of them, but only one school requires majors to take more than a beginner course—Oklahoma City University. Many prestigious dance programs, like the ones at NYU Tisch School of the Arts and SUNY Purchase, don't offer a single course in tap dance.

After months of lockdowns and virtual learning, many studios across the country are opening their doors and returning to in-person classes. Teachers and students alike have likely been chomping at the bit in anticipation of the return of dance-class normalcy that doesn't require a reliable internet connection or converting your living room into a dance space.

But along with the back-to-school excitement, dancers might be feeling rusty from being away from the studio for so long. A loss of flexibility, strength and stamina is to be expected, not to mention emotional fatigue from all of the uncertainty and reacclimating to social activities.

So as much as everyone wants to get back to normal—teachers and studio owners included—erring on the side of caution with your dancers' training will be the most beneficial approach in the long run.