You and your phone have more in common than you might guess, says Dr. Rafael Pelayo, pediatrician and clinical professor at the Stanford Center for Sleep Sciences and Medicine. "If you charge your phone halfway, it works for a few hours," he explains. "But it's not performing at its full potential, and you have to be careful about how you use that energy."

It'd be nice to just plug into the wall for nine hours until you hit 100 percent battery, but for (human) dancers, it's not that simple. So DS asked Dr. Pelayo and Dr. Argelinda Baroni, co-director of the Child and Adolescent Sleep Program in the department of child and adolescent psychiatry at NYU Langone Health, how to maximize your own battery life—ensuring you'll dance better and more safely in the process.

Mistake #1: Underestimating the effects of caffeine

"Caffeine is the devil!" says Baroni. If that sounds extreme, consider this: Caffeine stays in our bodies for six hours on average. If you drink a cup of coffee at 4 pm to jumpstart an afternoon of dancing, that's the equivalent of drinking half a cup at 10 pm. "Even if you have no trouble falling asleep, caffeine blocks adenosine receptors, making your sleep less deep," explains Baroni. "You wake up less rested."

The Fix: "If you like coffee and you're used to it, drink only decaf in the afternoon," says Baroni. "It sounds harsh, but it's super-effective in making you sleep better and need less caffeine."

Mistake #2: "Catching up" on sleep over the weekend

Long rehearsals, late-afternoon classes, and hours of homework have a way of interfering with weeknight shut-eye. But catching up on sleep after the fact is not actually a thing. "You wouldn't stop eating Monday through Friday, then gorge yourself over the weekend," says Pelayo. "Even if you skip sleep completely one night, you don't sleep 16 hours the next. Ten hours or so is the most your brain allows based on evolutionary needs." And one to two extra hours on the weekend won't negate an ongoing or acute sleep deficit.

The Fix: Get the sleep you need, when you need it. This is one area where procrastination is really not your friend.

Mistake #3: Being left to your own devices

We're talking about electronic devices, like phones, tablets, and laptops. Using these bad boys close to bedtime can make you toss and turn because they emit blue light, which interferes with production of melatonin (the hormone that helps you drift off). "You might think watching a movie or chatting with friends helps you relax after a stressful night at the studio, but the screen (and the need to be constantly connected) interferes with your ability to sleep, and your sleep quality," says Baroni. 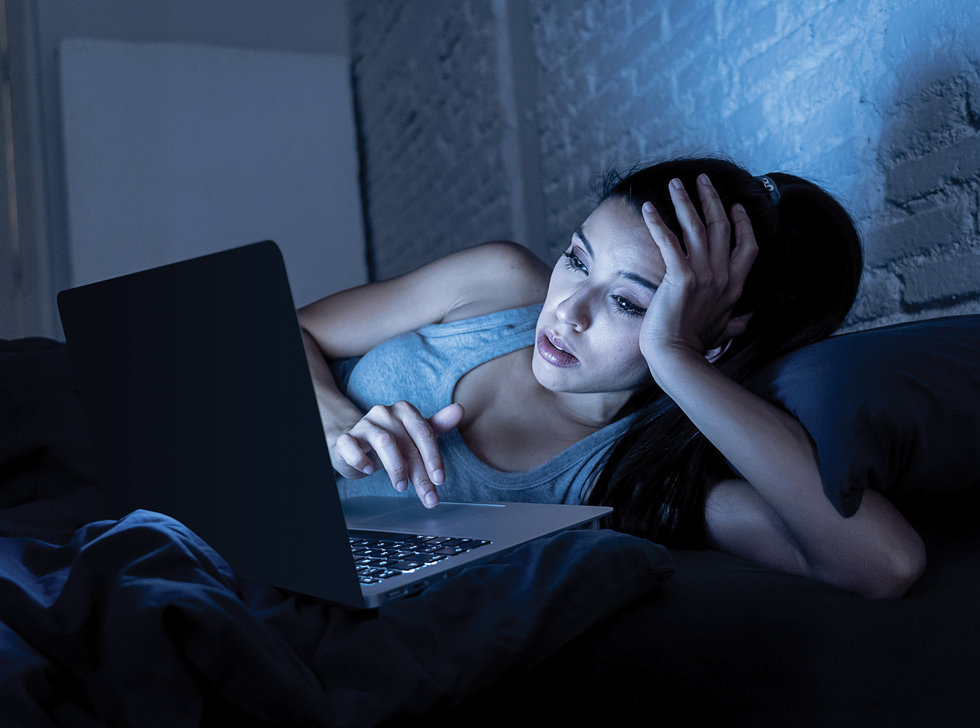 The Fix: Give your devices their own bedtime an hour or two before you nod off. Have last-minute homework on the computer? Turn on the "nighttime" display mode, and turn the brightness down.

Ever gotten up from a nap only to feel groggier than before? You probably slept too long or too late in the day. "Too long or late of a nap gets you into deep sleep," says Pelayo, "so you feel more tired as soon as you wake up." (Don't rely on napping to make up for last night's insufficient sleep, either—shorter sessions don't allow you to enter the deeper sleep stages in which complex mental and physical rest and repair occur.) 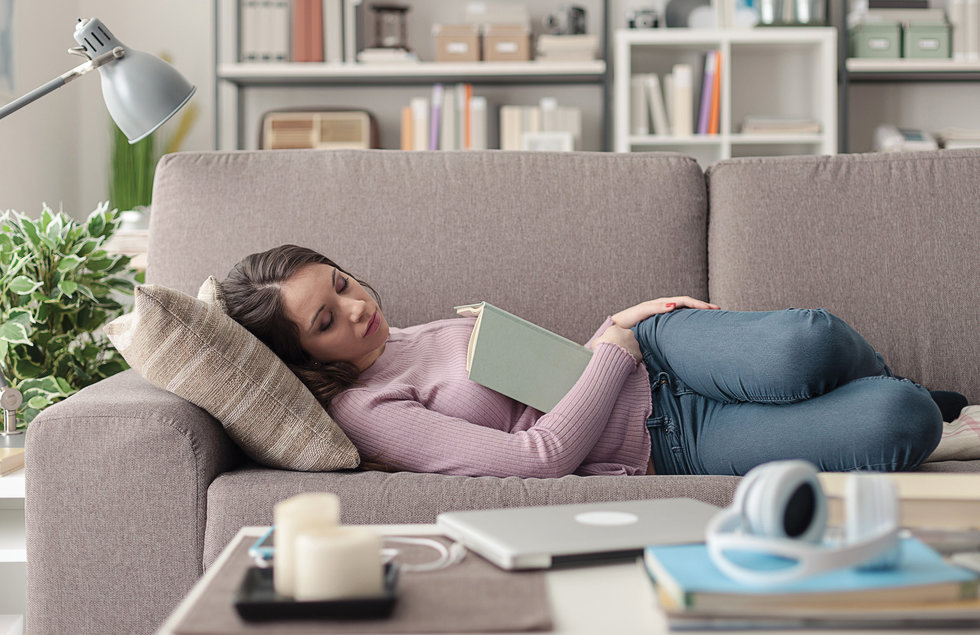 The Fix: "Nap between 3 and 4 pm for no more than a half hour," Baroni says. "I would never suggest anybody nap at 5 pm or later."

Do you wake up at 6 am for school, but sleep until noon whenever you don't have morning dance commitments on the weekend? "That's the same amount of 'jet lag' as going to Paris for the weekend," says Baroni, and it can make falling asleep on Sunday night much harder.

The Fix: "Avoid sleeping marathons, and keep wakeup times within a two- or three-hour range," advises Baroni. "If you wake up at 6 am Monday through Friday, don't sleep later than 8 or 9 am on Saturday and Sunday."

If you like us online, you'll love us in print!
Music
Betsy Farber

Marissa Osato’s Challenge to Students: Don’t Dance With the Music

In most classes, dancers are encouraged to count the music, and dance with it—emphasizing accents and letting the rhythm of a song guide them.

But Marissa Osato likes to give her students an unexpected challenge: to resist hitting the beats.

In her contemporary class at EDGE Performing Arts Center in Los Angeles (which is now closed, until they find a new space), she would often play heavy trap music. She'd encourage her students to find the contrast by moving in slow, fluid, circular patterns, daring them to explore the unobvious interpretation of the steady rhythms.

"I like to give dancers a phrase of music and choreography and have them reinterpret it," she says, "to be thinkers and creators and not just replicators."

Osato learned this approach—avoiding the natural temptation of the music always being the leader—while earning her MFA in choreography at California Institute of the Arts. "When I was collaborating with a composer for my thesis, he mentioned, 'You always count in eights. Why?'"

This forced Osato out of her creative comfort zone. "The choices I made, my use of music, and its correlation to the movement were put under a microscope," she says. "I learned to not always make the music the driving motive of my work," a habit she attributes to her competition studio training as a young dancer.

While an undergraduate at the University of California, Irvine, Osato first encountered modern dance. That discovery, along with her experience dancing in Boogiezone Inc.'s off-campus hip-hop company, BREED, co-founded by Elm Pizarro, inspired her own, blended style, combining modern and hip hop with jazz. While still in college, she began working with fellow UCI student Will Johnston, and co-founded the Boogiezone Contemporary Class with Pizarro, an affordable series of classes that brought top choreographers from Los Angeles to Orange County.

"We were trying to bring the hip-hop and contemporary communities together and keep creating work for our friends," says Osato, who has taught for West Coast Dance Explosion and choreographed for studios across the country.

In 2009, Osato, Johnston and Pizarro launched Entity Contemporary Dance, which she and Johnston direct. The company, now based in Los Angeles, won the 2017 Capezio A.C.E. Awards, and, in 2019, Osato was chosen for two choreographic residencies (Joffrey Ballet's Winning Works and the USC Kaufman New Movement Residency), and became a full-time associate professor of dance at Santa Monica College.

At SMC, Osato challenges her students—and herself—by incorporating a live percussionist, a luxury that's been on pause during the pandemic. She finds that live music brings a heightened sense of awareness to the room. "I didn't realize what I didn't have until I had it," Osato says. "Live music helps dancers embody weight and heaviness, being grounded into the floor." Instead of the music dictating the movement, they're a part of it.

Osato uses the musician as a collaborator who helps stir her creativity, in real time. "I'll say 'Give me something that's airy and ambient,' and the sounds inspire me," says Osato. She loves playing with tension and release dynamics, fall and recovery, and how those can enhance and digress from the sound.

"I can't wait to get back to the studio and have that again," she says.

Osato made Dance Teacher a Spotify playlist with some of her favorite songs for class—and told us about why she loves some of them.

"Get It Together," by India.Arie

"Her voice and lyrics hit my soul and ground me every time. Dream artist. My go-to recorded music in class is soul R&B. There's simplicity about it that I really connect with."

"Turn Your Lights Down Low," by Bob Marley + The Wailers, Lauryn Hill

"A classic. This song embodies that all-encompassing love and gets the whole room groovin'."

"This song's uplifting energy and drive is infectious! So much vulnerability, honesty and joy in their voices and instrumentation."

"There Will Be Time," by Mumford & Sons, Baaba Maal

"Mumford & Sons' music has always struck a deep chord within me. Their songs are simultaneously stripped-down and complex and feel transcendent."

"With The Love In My Heart," by Jacob Collier, Metropole Orkest, Jules Buckley

"Other than it being insanely energizing and cinematic, I love how challenging the irregular meter is!"

For Parents: The Ultimate Guide to the Virtual Summer-Intensive Audition Process

In the past 10 months, we've grown accustomed to helping our dancers navigate virtual school, classes and performances. And while brighter, more in-person days may be around the corner—or at least on the horizon—parents may be facing yet another hurdle to help our dancers through: virtual summer-intensive auditions.

In 2020, we learned that there are some unique advantages of virtual summer programs: the lack of travel (and therefore the reduced cost) and the increased access to classes led by top artists and teachers among them. And while summer 2021 may end up looking more familiar with in-person intensives, audition season will likely remain remote and over Zoom.

Of course, summer 2021 may not be back to in-person, and that uncertainty can be a hard pill to swallow. Here, Kate Linsley, a mom and academy principal of Nashville Ballet, as well as "J.R." Glover, The Dan & Carole Burack Director of The School at Jacob's Pillow, share their advice for this complicated process.

It is the urgency of going in a week or two before opening night that Lydia Abarca Mitchell loves most about coaching. But in her role as Ballethnic Dance Company's rehearsal director, she's not just getting the troupe ready for the stage. Abarca Mitchell—no relation to Arthur Mitchell—was Mitchell's first prima ballerina when he founded Dance Theatre of Harlem with Karel Shook; through her coaching, Abarca Mitchell works to pass her mentor's legacy to the next generation.

"She has the same sensibility" as Arthur Mitchell, says Ballethnic co-artistic director Nena Gilreath. "She's very direct, all about the mission and the excellence, but very caring."

Ballethnic is based in East Point, a suburban city bordering Atlanta. In a metropolitan area with a history of racism and where funding is hard-won, it is crucial for the Black-led ballet company to present polished, professional productions. "Ms. Lydia" provides the "hard last eye" before the curtain opens in front of an audience.